The Odyssey of the Lost Mural was presented on 24 June 2020 online via a Zoom session.  A video version of it is online here.

Portion of Mural (by Richard Kerschner) 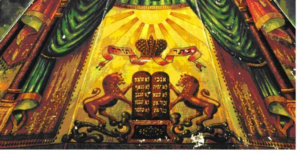 Beginning in the late 19th century, Burlington, Vermont became the unlikely location of a community of Jews from Cekiske, Lithuania. Their presence in this remote New England town was so remarkable that it became known as “Little Jerusalem,” a transplanted Lithuanian shtetl. Two native sons of Burlington, Aaron Goldberg, a retired lawyer, and Jeff Potash, former professor of history at Trinity College in Burlington, Vermont, will recount the history of Burlington’s Jewish Community and the story of its Lost Mural. The Lost Mural was painted in 1910 in Burlington’s Chai Adam Synagogue by Ben Zion Black, a talented artist and immigrant to Burlington from Kovno, Lithuania.

The large, heavy Lost Mural, long hidden from view behind a protective false wall, was rediscovered in 1986.  After a multi-phase five-year planning effort and an extraordinary feat of architectural, conservation and engineering planning, it was stabilized, extracted and transported from its initial synagogue home to Burlington’s Ohavi Zedek Synagogue in 2015.  A campaign is now in progress to restore the unknown and lost colors of the mural to their original vibrancy.  The Lost Mural is a rare example of the Eastern European tradition of synagogue wall paintings — and a legacy which Aaron and Jeff are proudly working to restore and make more widely known through an educational initiative.

Aaron Goldberg is a retired attorney from Burlington, Vermont, where he practiced elder law before retiring, He is also the Co-Archivist of Ohavi Zedek Synagogue.  He has taught legal courses at Champlain College and spoken before many organizations on legal issues, as well as publishing estate planning materials.  He received his B.A. in American Studies from Brandeis University (1979), and his J.D. from Suffolk University Law School (1982).

Jeff Potash is a former Professor of History at Burlington, Vermont and has taught and published extensively on local history topics.  Among other works, he is the co-author of Freedom & Unity: A History of Vermont (2004) and the author of Vermont’s Burned Over District: Patterns of Community Development and Religious Activity 1776-1850 (1991). His book, Vermont’s Burned-Over District, evinces his lifelong fascination with the interplay between religious and larger community dynamics. He is also the Co-Archivist of Ohavi Zedek Synagogue.

Aaron and Jeff are natives of Burlington and have collaborated on many exhibits and presentations about the Burlington, Vermont Jewish Community.  They were the Contributing Archivists for Vermont Public Television’s production of “Little Jerusalem: Burlington’s Jewish Community.”  Aaron and Jeff are on the Board of Directors of the Lost Mural Project and were the catalysts behind the move of the mural.  The Lost Mural Board is currently in a campaign for the mural’s restoration and an immigrant educational initiative.