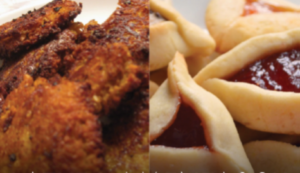 Our annual Max Ticktin Memorial Latke-Hamentashen Debate is always a very popular event!  Watch our humorous moderator and distinguished panelists conduct a scholarly, but absurdist, symposium that addresses the eternal conundrum: “Which are better, latkes or hamentashen?”

Howard Mortman, C-SPAN Director of Communications, by popular demand is retuning as moderator for the third time.  His book When Rabbis Bless Congress: The Great American Story of Jewish Prayers on Capitol Hill was recently published.  Howard has also appeared on stage performing stand-up comedy at the DC Improv.

Danny Fingeroth, the son of a cantor, is a popular-culture critic and historian, with a focus on comics and graphic novels, especially from a Jewish perspective.  His most recent book is A Marvelous Life: The Amazing Story of Stan Lee (2019, St.  Martin’s Press/Macmillan), the definitive biography of the co-creator of Marvel Comics and its most famous characters, including Spider-Man, the Avengers and the X-Men.  His other books include Disguised as Clark Kent: Jews Comics and the Creation of the Superhero.  Danny was a longtime executive editor and writer at Marvel Comics, where he ran the company’s Spider-Man line, and he was a founder of Brooklyn’s Jewish Comic Con and the curator and moderator of the YIVO Institute’s “Comics and the Jewish-American Dream” interview series.

Chaim (Harold) Fruchter is a physician assistant and has been performing Jewish music professionally for 50 years.  He has appeared on more than 25 albums and is the longtime lead singer and guitarist of the Baltimore based simcha band, Kol Chayim Orchestra.  From 1981-2020, Chaim and his family lived in Silver Spring, MD where he regularly taught Torah classes, in the White Oak, Kemp Mill, and Ohev Sholom/National Synagogue communities.  He and his wife Rena now live in south Philadelphia, as part of the growing orthodox community there, spearheaded by their daughter, Rabbanit Dasi Fruchter, founder and spiritual leader of The Shtiebel shul.

Judybeth Greene is an artist, a ceramics and visual arts teacher at Albert Einstein High School in Kensington, MD, and a former voting rights attorney at the Department of Justice.  She carries her long history in civil rights and advocacy into her teaching, where Judybeth uses art to empower student voices and to support mental health.  Her artwork has been featured in galleries and restaurants, in books and magazines.  She received a Creativity Grant from the Maryland State Arts Council in 2019 for her community-building ceramics project “Fish Sticks.”  She actively engages the Jewish community with her artwork, teaching and educational leadership.

Lucy Steinitz was the executive director of Jewish Family Services in Baltimore before she left the USA to live in Africa for 17 years. Currently, she works for Catholic Relief Services on international peacebuilding projects. While living abroad, she suffered severe withdrawal symptoms from not eating good hamantaschen all those years – something she has vowed to never allow again.