The recording of the Roots presentation is at: https://youtu.be/v00qC2sM5-M

Zionist settler Rabbi Hanan Schlesinger and Palestinian Noor Awad will share the ways that their own narratives were fundamentally challenged and ultimately expanded to include the truth of the other as a result of face-to-face contact with the other side.  The presentation will address the narratives, identities and pathos of daily life within the Israeli-Palestinian conflict and outline the philosophy of Roots, the grassroots movement for understanding, nonviolence and transformation. There will be ample time for Q & A at the end.

Hanan Schlesinger is an Orthodox rabbi and teacher, and a passionate Zionist settler who has been profoundly transformed by his encounters with Palestinians since late 2013.

Originally hailing from New York, Rav Hanan immigrated to Israel on his own at the age of 20 and has lived in Alon Shvut, Gush Etzion (in the West Bank), for over 30 years.  His family background is Reform but he began delving into observant Judaism in high school.  After college, he spent over 10 years in advanced study, primarily at the Har Etzion College of Jewish Studies and in a graduate program of the Dept. of Jewish Philosophy at Hebrew University.

His first professional work was teaching Jewish studies to young adults, primarily in various colleges of Jewish studies and seminaries in the Jerusalem area.  From 1998 to 2000 he served as a fellow in the Judaic Fellows Program in Boca Raton, FL.  In 2005 to 2013 he taught Jewish studies in Dallas, TX, first as head of a kollel (a learning institute for married men) and later as founder of the Jewish Studies Initiative of North Texas.

When he returned from Texas in 2013, he realized for the first time that Palestinians deserve to be recognized and treated as equals.  The next year he founded ROOTS/Judur/Shorashim with Palestinian Ali Abu Awwad and with Rabbi Shaul Judelman.  Rav Hanan is also the founder of the American Friends of Roots, and currently serves as Director of International Relations for Roots. 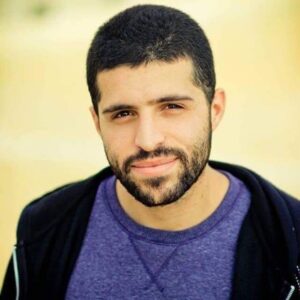 Noor Awad is the member of the ROOTS leadership team who is its Palestinian English-language spokesperson.

He moved with his family from Amman, Jordan to the West Bank town of Beit Sahour following the signing of the Oslo Accords and there began thinking about his identity as a Palestinian refugee.  While studying to become a tour guide, Noor travelled to Israel and for the first time saw Israelis beyond the frame of “occupying soldiers.”  In 2012, Noor was licensed by the Palestinian Ministry of Tourism.  After meeting Rabbi Hanan Schlesinger and Ali Abu Awwad in 2016, Noor joined Roots, where he currently organizes joint Palestinian-Israeli activities.  Noor speaks to visiting groups about his personal experiences living through the conflict as a Palestinian who has seen much tragedy, and why he is motivated to work toward a political solution.  Noor resides in Bethlehem today, where he guides English speakers on geopolitical tours of the region. 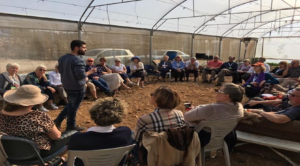