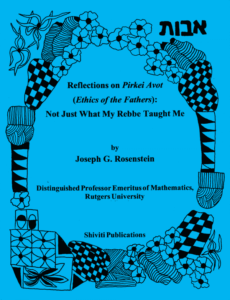 Pirkei Avot is a collection of approximately 100 teachings by sages between 300 BCE and 200 CE.  Many of the teachings deal with ethical behavior, so the collection became known (in English) as Ethics of the Fathers.  These teachings became the foundation for ethical movements in Judaism and for subsequent more systematic treatments of Jewish ethics.

Joe Rosenstein’s Reflections on Pirkei Avot – Not just what my rebbe taught me differs from many other such books by:
— writing in an informal, easily understood manner
— comparing and contrasting different teachings that deal with the same topic.
— relating the historic contexts of the teachings.
— relating the teachings to contemporary events.
— often challenging the assumptions of the ancient teachers.
— pointing out when teachings may be faulty and when commentators misinterpret the teachings.
— having separate chapters on major themes, such as life after death.

The book can be purchased at JoeRosenstein.com for $40, including shipping. 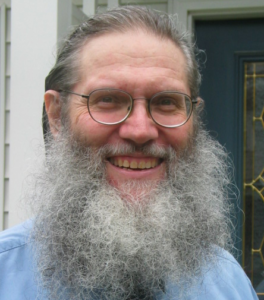 Joseph G. Rosenstein was a professor of Mathematics at Rutgers University for 48 years before retiring in 2017.  He has published prayer books Siddur Eit Ratzon for Shabbat and Jewish festivals and Machzor Eit Ratzon for the Jewish High Holidays, as well as mathematics textbooks and research articles.  His prayer books have been adopted by over 100 congregations and he has taught many courses on Judaism in synagogues and at programs of the National Havurah Committee, which he co-founded.