The chat text from the class is at 22F3 Making of the Soviet Jew – Google Drive.

How the Soviet Jew was Made can be purchased from your local bookstore, from Amazon (including a kindle/ebook version) or directly from the author (senderov@uw.edu).   You can also loan it from your local library or ask them to order it by interlibrary loan.

The class recording is only accessible to students who registered for the class. 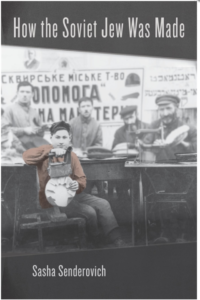 In his book How the Soviet Jew was Made (2022, https://bit.ly/SovietJewBook), Sasha Senderovich proposes that the end of the Pale of Settlement in 1917, followed by the Bolshevik Revolution, the violence of pogroms of the so-called Russian Civil War, and the eventual establishment of the Soviet state can be seen as events that brought on the formation of the new cultural figure, the Soviet Jew, who can be understood as a product of cultural, literary, cinematic, and historical texts in the first two decades of the USSR.

In this presentation, Senderovich will consider how the subsequent ruptures of the 20th century — first, the Holocaust on Soviet territory and then the decline and disintegration of the USSR — spurred the evolution of the figure of the Soviet Jew from the state-level antisemitism of the late Stalin years to the Soviet Jewry Movement during the Cold War, and beyond.

As many Jews, who were once Soviet citizens, find themselves on the move once again in the months since the brutal escalation of Russia’s war against Ukraine in February 2022, does the Soviet Jew still exist in the 21st century and what is this figure’s future?

Sasha Senderovich is an assistant professor in the department of Slavic Languages and Literatures and the Jackson School of International Studies, and a faculty affiliate at the Stroum Center for Jewish Studies at the University of Washington in Seattle.  He and Harriet Murav translated David Bergelson’s Yiddish novel Judgement and are currently working on another translation project – In the Shadow of the Holocaust: Short Fiction by Jewish Writers from the Soviet Union.  His monograph How the Soviet Jew was Made was published by Harvard University Press in 2022.  He has also published essays on literary, cultural, and political topics in the Los Angeles Review of Books, the New York Times, the Forward, Lilith, Jewish Currents, the Stranger, and the New Republic.  More information on his works can be found on http://www.sashasenderovich.com/.